tabletbiz.com is reader-supported. When you buy via links on our site, we may earn an affiliate commission at no extra cost to you. Learn more.

If you haven’t noticed, the tablet market is thriving right now as compared to last year, according to a report from strategic analytics, which predicts massive growth for practically every tablet maker in the first quarter of 2021.

As a result, what was once almost a niche market dominated by only a few brands has become a multi-billion dollar industry. Growing competition has recently launched some genuinely appealing tablets, and unless you’re a power user looking for the most powerful device with all the high-end features components, there are many of enticing options around $500.

Looking for the overall best tablet under $500? Grab the Apple iPad 9th Gen.

Read on for the full list, or jump to a favorite below:

If you’re already immersed in the Apple environment, getting an Android tablet makes little sense, and this iPad will carry you through your workloads just fine, whether you’re a student or an aspiring digital artist.

It’s a little sad to see Apple stay with first-generation pencil support, but if you can get over that, this iPad is one tough cookie.

Then there are the pro apps, such as Adobe Fresco and Procreate, which are only accessible on the iPad – not to say that Android doesn’t have its fair share of good drawing apps, but any digital artist will tell you where the gold standard is.

Moreover, this iPad’s performance bump to A13 Bionic is a pretty great improvement, and even the base storage has been increased from 32 gb to 64 gb. This time, as you’d imagine, everything just flies by, whether you’re gaming or multitasking.

From the handy shortcut to launch the notes app to all those multitasking conveniences, iPad OS 15 allows you to make the most of this large screen real estate.

I like how the front-facing camera now supports center stage. It makes attending video conversations much more efficient because you can now walk around a little without falling out of frame.

However, the design of this iPad will not wow everyone. If you ask me, the thick bezels combined with the outdated lightning port are a bit of a letdown.

Furthermore, while this four-by-three display is fantastic for productivity-oriented tasks, streaming videos here isn’t the most immersive experience unless it’s something like Jack Snyder’s justice league or other videos with a four-by-three aspect ratio.

The large letterboxes at the top and bottom become rather distracting. You could, however, learn to live with it. 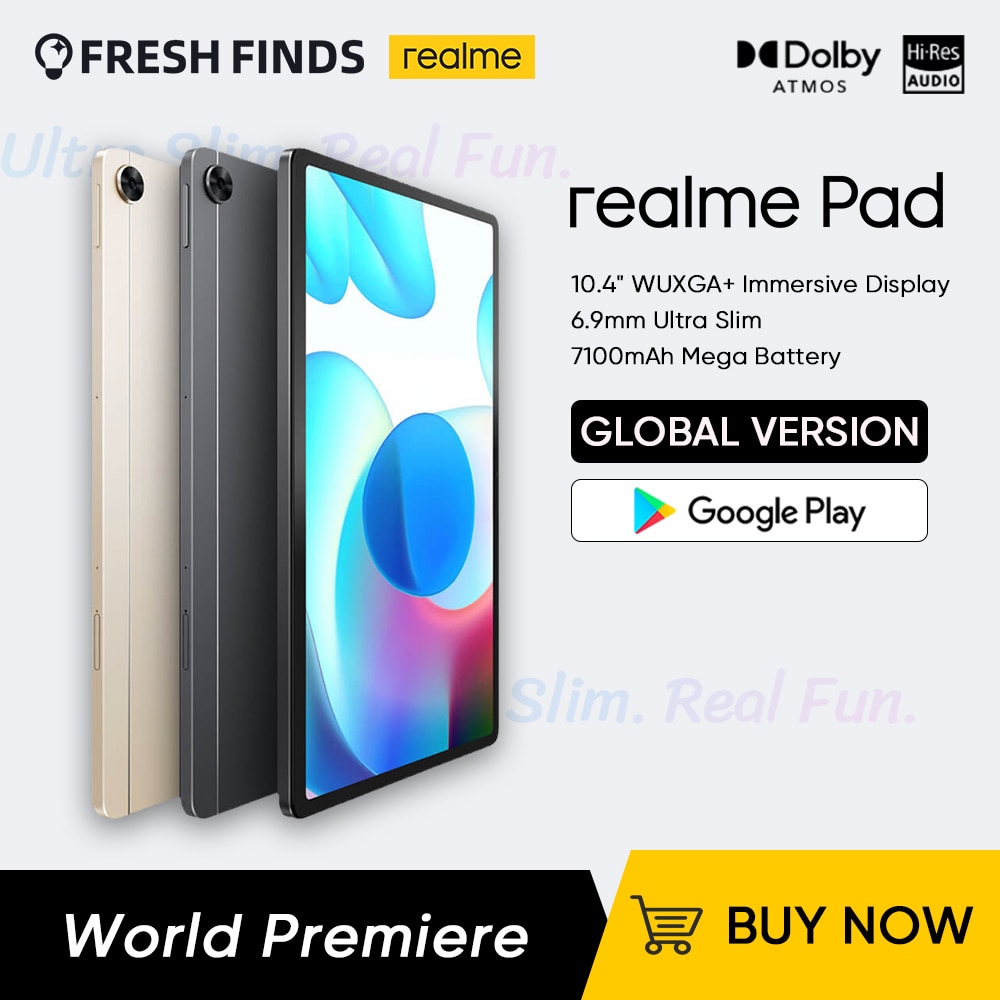 The Realme Pad is a wonderful tablet for the money, and its good build quality could fool you into thinking it’s a premium device.

This aluminum unibody design, along with a sleek and lightweight build quality, radiates a premium appearance and feel.

TheRealme Pad features a typical 10.4 inch LCD screen but with a sharp 2k resolution so no more squinting to see your notes or settling for low quality video streaming since it is also Wildvine L1 certified complimenting the media consumption experience. It boasts a quad speaker configuration with Dolby Atmos audio, which gets loud enough and is absolutely adequate for the price.

This display is extremely nice to use on a bright sunny day or when I’m wrapped up under a warm blanket in chilly weather to read a book.

There aren’t many tablet-specific features on theRealme Pad, but this isn’t necessarily a deal breaker given that it’s a low-cost tablet aimed at students, children, or individuals who simply want a huge screen to watch their favorite shows.

Regardless, you won’t be running demanding apps or games on theRealme Pad, therefore the Helio g80 will suffice. Even my gaming testing reveal that with tweaking some parameters, it can handle several popular titles like PUBG and Call of Duty Mobile.

Aside from typical chores like browsing the web, editing documents, and attending online meetings, this gadget is up to the task.

TheRealme Pad managed to go nearly two days without needing to be recharged, which is even more astounding. 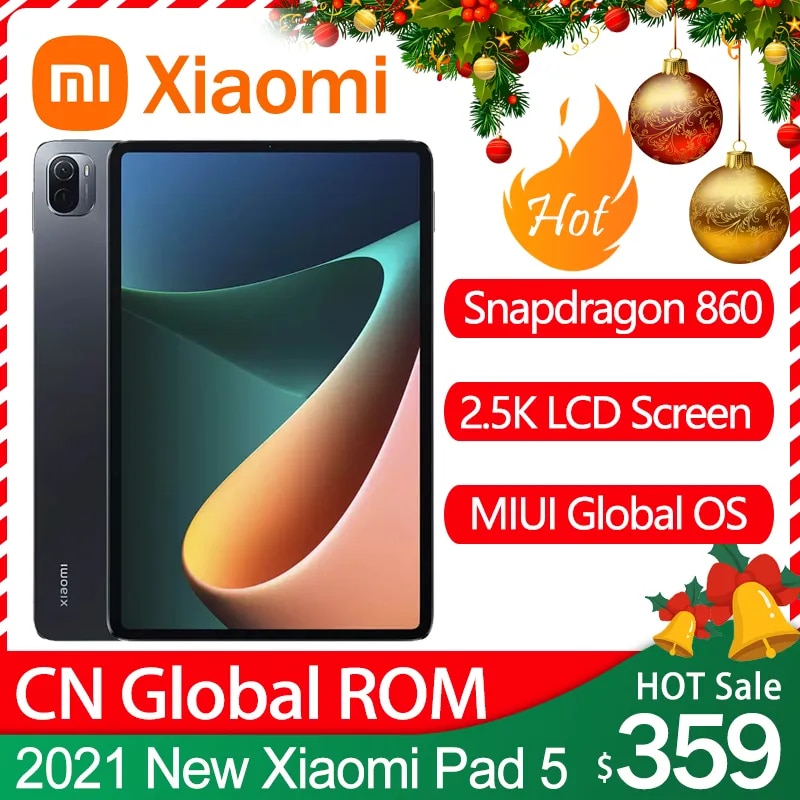 After being absent from the tablet market for a few years, Xiaomi made a spectacular comeback this year with a handful of truly interesting products.

However, only the entry-level Xiaomi Pad 5 has seen a global release thus far, with the pro models reserved for China.

Anyway, when compared to other Android tablets in the same price range, what Xiaomi has accomplished with this is quite amazing. Most of them have a subpar chipset, which degrades the overall experience, but Xiaomi has managed to deliver excellent performance, an attractive design, and a fantastic display all at a reasonably low price.

I put the Xiaomi Pack 5 through a battery of tests, including CPU and GPU stress tests, gaming, and multitasking, and it passed with flying colors. The snapdragon 860 is a solid performer, which opens up a plethora of opportunities for transforming the xiaomi pad 5 into your go-to productivity machine.

Unfortunately, its official keyboard and stylus accessories are not as commonly available, nor are they inexpensive. Furthermore, when it comes to making the most of such a wide display, the Miui 4 pad android skin falls short of the iPad OS or Samsung’s One UI, and Xiaomi skipping LTE connectivity totally on this tablet comes as a surprise.

However, none of this should be of concern to anyone considering the Xiaomi Pad 5 as a media consumption device. It features the most amazing display of any of the tablets discussed above, and with a smooth 120 hertz refresh rate paired with the booming quad speaker array, you will become hooked to watching movies on the Xiaomi Pad 5.

If you’re looking for a true Android tablet with outstanding and proven polished software, the Samsung Galaxy Tab S7 FE is one of the few options available under $500. It shines exactly where the Xiaomi Pad 5 lacks, and vice versa.

One of the biggest selling features of theGalaxy Tab S7 FE is that it comes with a free S-Pen. Granted, it’s not an active stylus like the standard Tab S7 series, but it’s a great item to have for easy note taking and even sketching.

The improved One UI 3.1 makes it much easier to use the tablet’s enormous 12.4-inch display, as well as all of the other useful features such as the ability to open numerous apps at once.

Nonetheless, theGalaxy Tab S7 FE is not without its limitations, as it has a few of its own.

This smartphone is also rather heavy, despite the fact that it has a huge screen and a massive battery within.

These ultimately contribute to the device’s overall weight of 610 grams. This is by far the heaviest stand-alone tablet I’ve used.

As a result, after a while, I found myself struggling to hold it in one hand.

If you prefer something sleeker and more portable, Apple has you covered with the new iPad Mini, which is created with portability in mind.

The 6th generation iPad includes the A15 bionic processor, which is also found in the current iPhones; thus, the compact size combined with this strong chip makes the iPad Mini an excellent gaming tablet.

Aside from that, the iPad Mini has been my go-to tablet for reading ebooks or binge-watching Netflix because its lightweight design allows me to take it with me wherever I go. However, this screen does not get as bright as I would like and does not support a refresh rate of 120 hertz.

However, unlike the 9th generation iPad, the mini has a laminated display and supports the current second generation Apple pencil, so I can easily imagine this as a portable sketch pad for digital artists.

However, at $499, things become a little more tricky. The iPad Mini does not come cheap, even for the base 64 GB wi-fi only variant.

Those who can afford to give up portability for something more powerful can get the iPad Air 4 for $100 extra than the iPad Mini above.

It offers a larger screen and magic keyboard compatibility to the mini’s other features, such as an USB-C port and a completely laminated display.

Adam is an IoT solutions veteran with 5+ years of experience in building Cloud, IoT & Connectivity solutions. While a tech writer, Adam is also an avid outdoorsman who may know as much about camping and the outdoors as he does about tech.

tabletbiz.com is reader-supported. When you buy via links on our site, we may earn an affiliate commission at no extra cost to you. Learn more. If you haven’t jumped on the silhouette cameo bandwagon yet, where have you been? This…

tabletbiz.com is reader-supported. When you buy via links on our site, we may earn an affiliate commission at no extra cost to you. Learn more. Tablets are the perfect device for kids of all ages, allowing them to learn about…